The Preemie Project needs over 100 Christmas/Winter themed hat and bootie sets for the next donation on 12/16 (mail by date is 12/9), so I've been busy knitting Santa Hats. I've used this pattern and this one. They are both really cute, but take a little longer to knit than a regular hat because you knit the top long enough to flop over. As I knitted these I began to realize that I would not be able to finish all the hats (not to mention the blankets) that I've committed myself to making in the next two weeks, so I came up with a Christmas hat that is faster to knit. 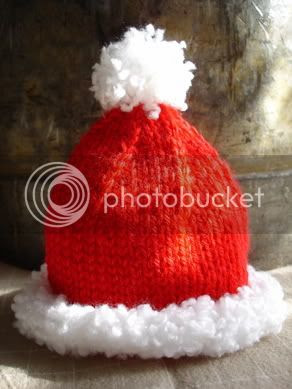 Instuctions:
Cast on 40 (48, 56) sts. in contrasting color. Divide stitches as evenly as possible on three needles. Join in the round. Knit until hat measures 1-1/2" (1-1/2", 1-1/2") from cast on edge. (The measurement for this part is approximate. I tried to knit the brim just long enough so it would roll, but not show where the new yarn is joined on the wrong side.)

Cut yarn leaving an end for sewing top. Pull through remaining stitches and draw up tightly to secure. Fasten off. Make a pom-pom from contrasting color and attach to top. Weave in all ends.
Copyright 2005 by Tracy Batchelder
For charitable and personal use only.

Please consider making one of these hats for The Preemie Project. Even though I did my best to be accurate with the instructions, it is possible that I made a mistake as I am still working out all the details.
Posted by Tracy Batchelder at 11:11 AM

Email ThisBlogThis!Share to TwitterShare to FacebookShare to Pinterest
Labels: hats, The Preemie Project

Thank you for commenting!
~Tracy

Find Me on Ravelry